Searching for the best dog toys for German Shepherds?

Perfect! You’re in the right place.

German Shepherds are large-sized, powerful dogs. When it comes to romping with a GSD, you will need toys that won’t get shredded in mere minutes.

Below is a quick list of all our top products. Keep scrolling to read our buying guide on the top toys German Shepherds. 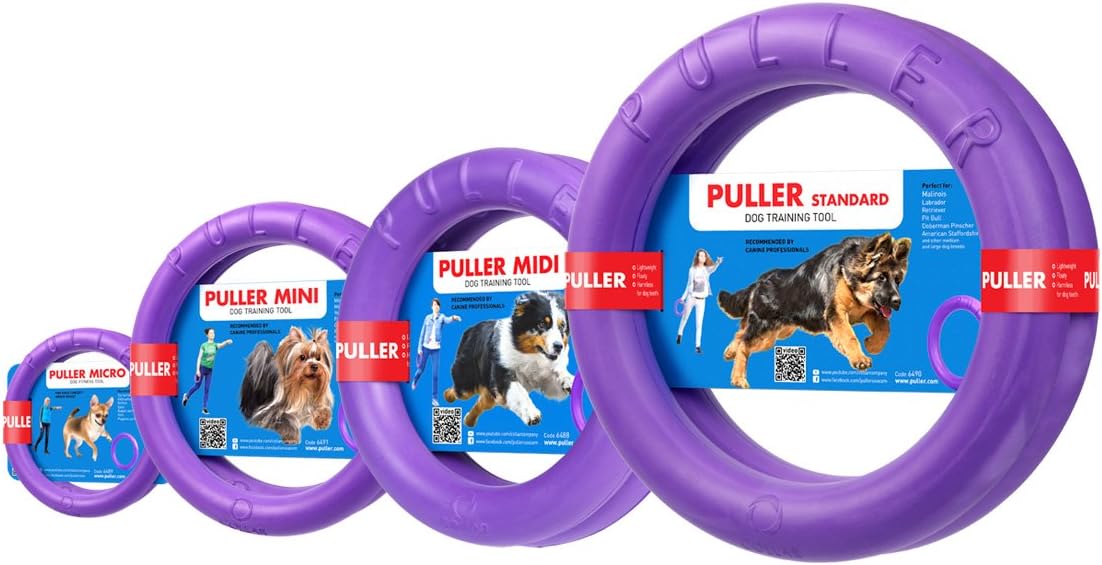 To our surprise, these Puller training rings don’t have a chemical smell, unlike other similar toys.

So there’s no funky smell on your hands after using them.

Perfect for playing fetch or training in the water, this toy will float on top and challenge your dog to retrieve it.

The uniquely designed dense foam will allow a dog’s teeth to sink in without damaging its gums or losing its shape.

Many reviewers have reported this toy to be a great substitute for playing fetch over a frisbee because of how soft and durable this is to play with.

In a hurry? Check out our top 5 dog toys for German Shepherds.

Read Also: >> What foods should you feed German Shepherds with sensitive gums?

What Are The Different Types of Dog Toys For German Shepherds?

For German Shepherds, the different types of dog toys include:

These types of toys are great for staving off boredom, anxiety and encouraging mental stimulation.

Your dog will usually have to figure something out or undertake a task to receive the reward.

The bite force of a German Shepherd in psi is 238 or 108 kg which is enough to crush human bones.

Chew toys provide the perfect alternative to humans and keep your dog happy and occupied for hours on end.

Many claim to be indestructible which is more of a title than the truth as it’s rare to find a toy that a GSD cant chew through.

Nevertheless, we certainly recommend having this type in your arsenal.

Tug-O-War Toys are usually made of rope and are meant to be tugged on either side by either two dogs or you and your doggo.

German Shepherds love these toys as they have a natural desire to bite and pull giving them hours of fun.

I like to tie the rope to a tree for my dogs to play on their own too.

Most squeaky toys will have an erratic bounce that creates an irresistible temptation to dogs.

Made of rubber and durable foams you can expect this type of toy to last longer than most.

That said, I would recommend you remain present with dogs using this type of toy as many owners have experienced their pets swallowing squeakers.

Choose from automatic ball launchers and Chuckit throwers to enjoy hours of fun playing fetch with your pooch.

Did you own a cuddle teddy bear when you were younger? Well, a plush toy is essentially the same thing, except designed for a pooch.

They come in food, balls, animals, and other types of shapes while being super soft and cuddly.

Some have cotton stuffing while others use no stuffing at all, so there’s no mess to clean up and no stuffing to swallow.

While not the most durable, these are great options for quick fun.

Read Also: >> What are the best dog treats to fill inside toys?

What Should You Look For In A high-Quality Dog Toy For German Shepherds?

If you are wondering how to select the right dog toy, ask yourself:

Does Your Dog Love To Cuddle?

Soft toys made of plush or fleece fabric will be truly appreciated by a German Shepherd that loves to cuddle.

Cuddly toys not only capture the attention of your dog, but they also keep your dog company emotionally during the hours you are out each day.

Toys that erratically bounce or fly are something your dog can retrieve. This satisfies his physical fitness requirement per day and his need for interactive play.

Does Your Dog Love To Chew?

Does your dog have jaws of steel? Most German Shepherds need heavy-duty toys due to the strength of their jaws.

A lot better than chewing up household items I guess!

How Long Will This Last?

Weak toys simply don’t last with tough chewers like german Shepherds. It’s time to get out the big guns and buy a tough toy that will match your dog’s strength.

Read More: >> What dog toys are best for Great Danes?

Our Reviews Of The Best Toys For German Shepherds

More than just a toy, these training rings by puller are also a tool you can use for fitness.

You get two rings with one purchase will let you increase the workout intensity and thus the stamina of your dog.

Puller training rings will solve all the issues German Shepherds caused by the lack of mental stimulation and physical activities.

This dog biting and training tool by Pet Artist features three handles on a bite pillow made of jute.

Its toy pillow is filled with man-made cotton and used for allowing a dog to bite on when training. 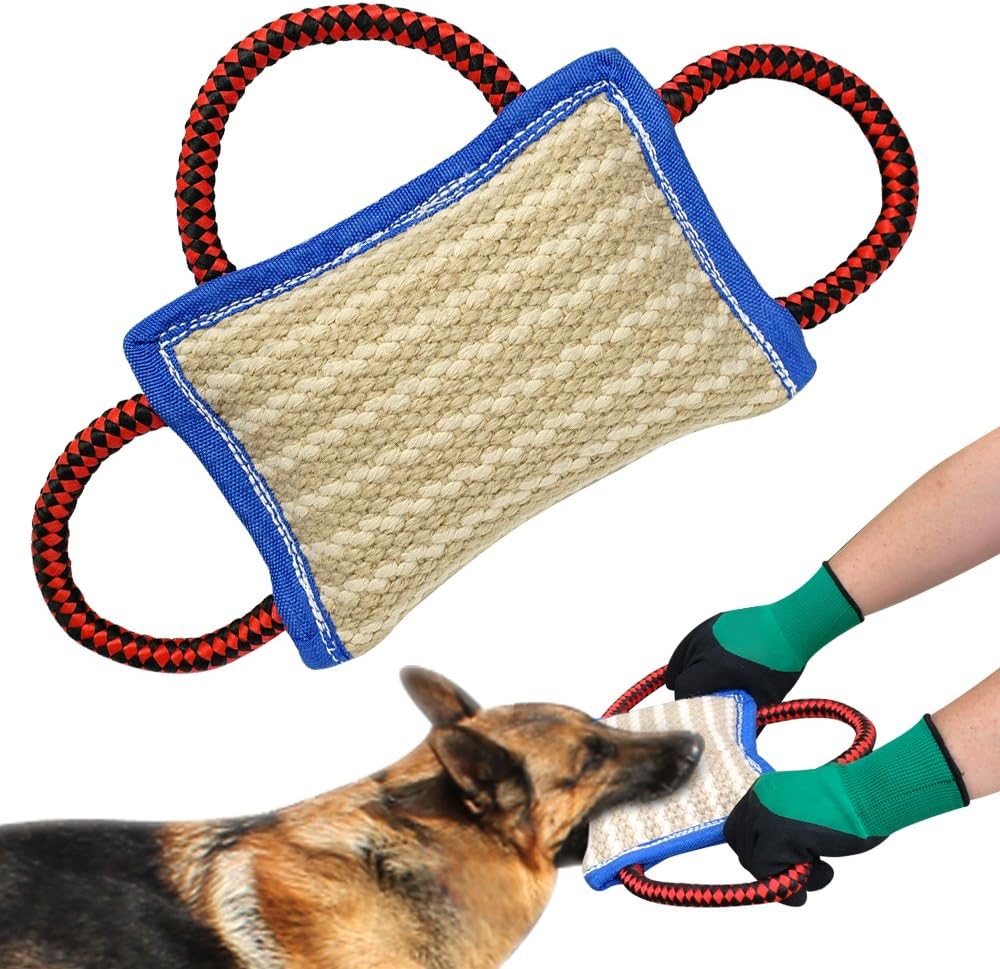 These materials are durable against dog bites and have three handles made of braided nylon.

This well-constructed, sturdy pillow is ideal for interactive play with your dog.

This Chuckit! Ultra Ball By Petmate features this fetch toy with bright blue and orange colors that keep dogs engaged.

Aggressive chewers will still love the softness of this toy and its thick rubber core will stand up to extreme chewing. 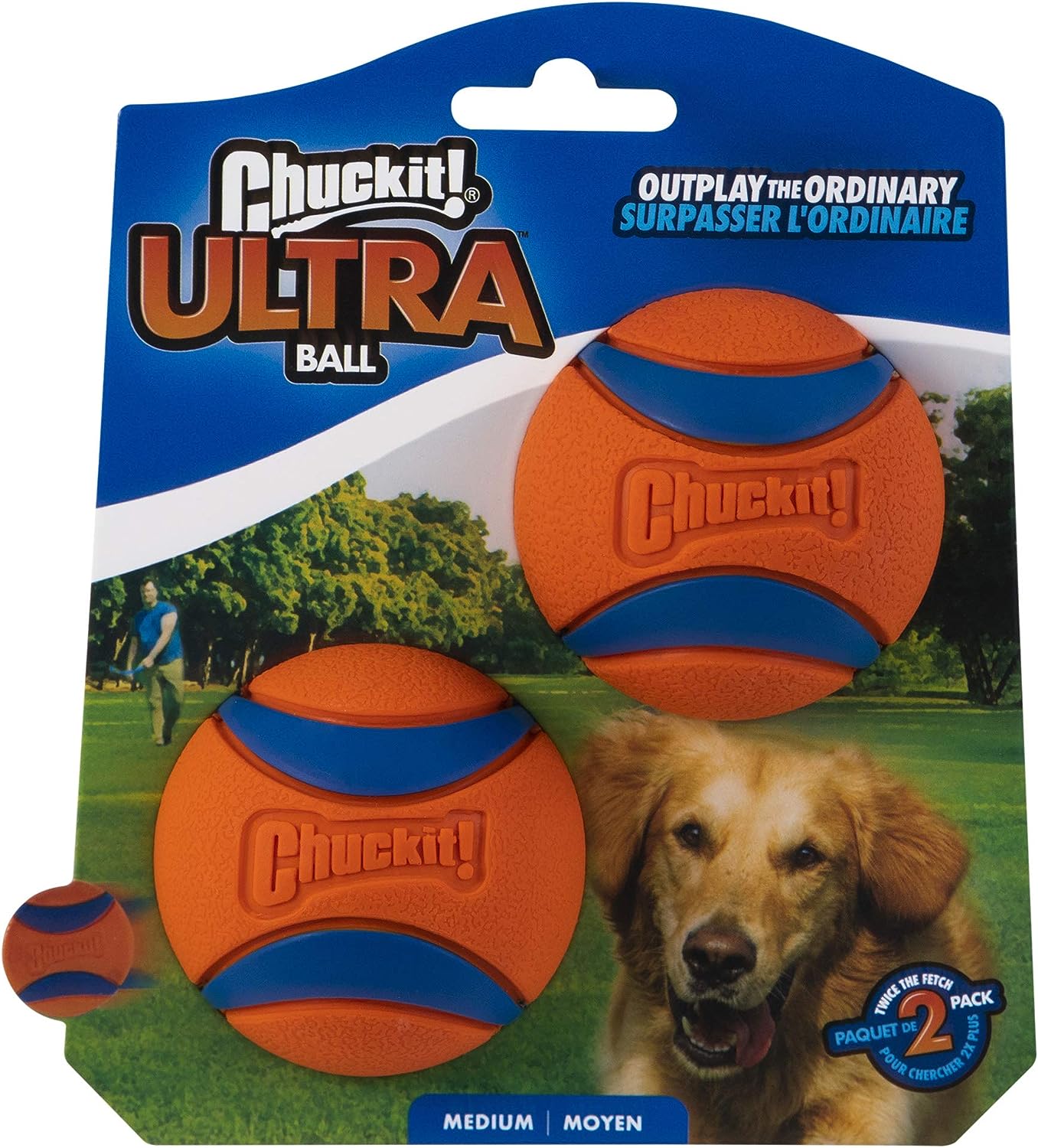 The textured surface on this rubber ball will help clean and strengthen jaw muscles, teeth and gums.

What makes this Chuckit! Ultra Ball different from other similar products is its high-impact bounce.

Designed for playing fetch even in pools and lakes, this buoyant design is also compatible with the ball launcher by Chuckit!

Intended for dogs that weigh over fifty pounds, this dog chewing toy is exquisitely made in the USA.

There are nubs and ridges on this chew toy exterior that are created to maintain the dental health of your dog.

Prevent the buildup of tartar and plaque through chewing.

Made of long-lasting nylon, this dog chew toy is durable to withstand the most aggressive chewing.

German Shepherds require a lot of chewing, which makes the toy a great option with its long-lasting features.

Free of phthalate, PVC, and BPA, this dog toy reduces the destructive behavior of your dog.

The rewarding, fun puzzle was created for the purpose of reducing destructive and anxious behavior. 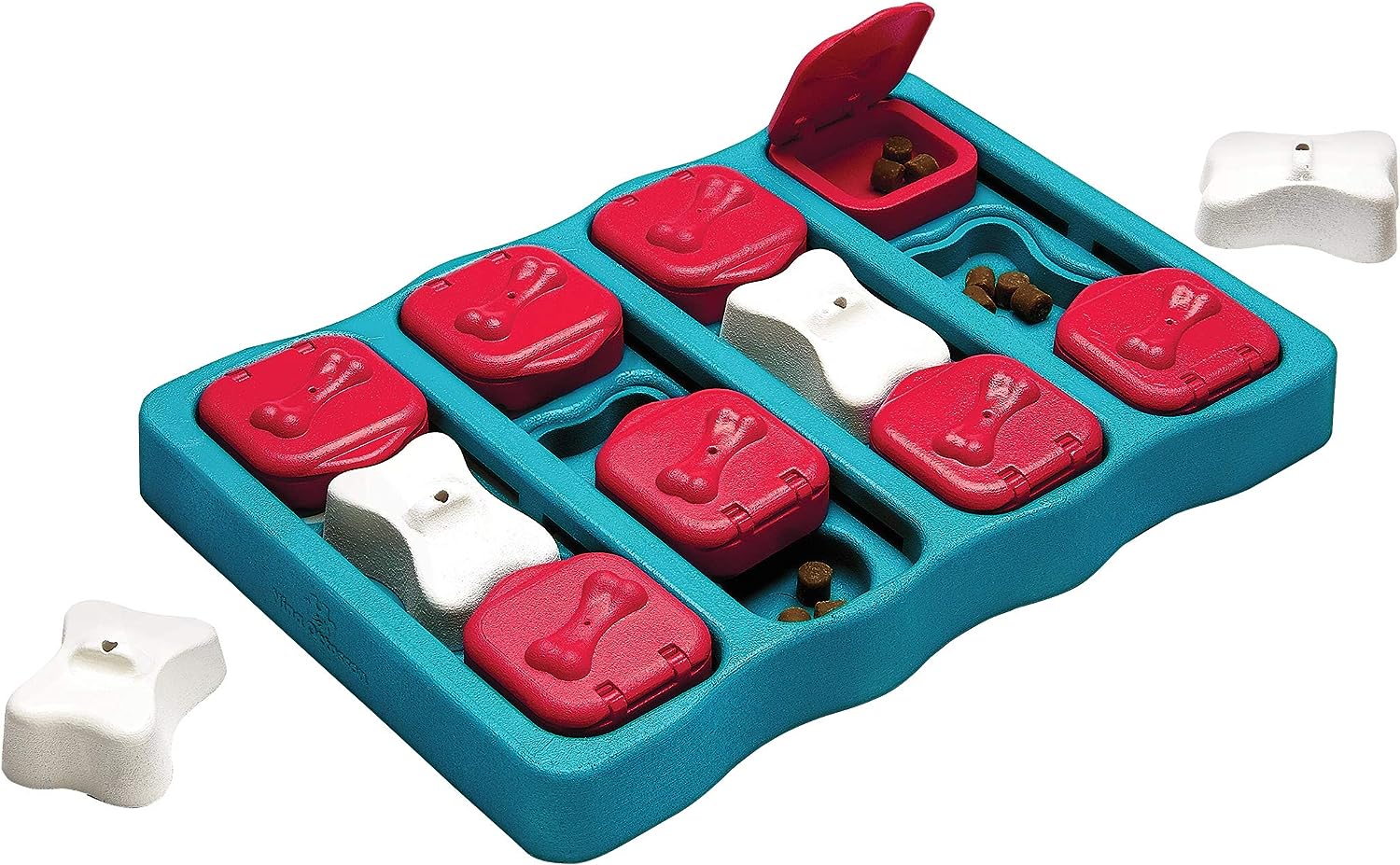 Hide treats by sliding, lifting, and flipping. There are three compartments to hide your dog’s favorite treats and hone his searching skills.

Slide to reveal the hiding spots while the third hidden compartment has removable bones in this dog puzzle toy.

While encouraging good playing habits, this rewarding puzzle is also a boredom buster.

The included combination of obstacles and steps keeps a dog stimulated which is especially important for German Shepherds.

Read Also: >> Travelling soon? What crates are best for traveling with German shepherds?

How do I care for my German Shepherd’s dog toys?

Some toys need to be tossed while some ought to be cleaned.

Toss toys that have dangling bits, missing parts, or have been chewed heavily. Smaller toys from when he was a puppy may be dangerous to play with as an adult. Toss these out.

The rest such as hard toys, rubber toys, or plastic toys can be cleaned with water and soap or tossed in the dishwasher with no detergent.

Microwave wet rope toys for a minute or throws these in the dishwasher with no soap.

As for plush or stuffed toys, you can put these in the washing machine but once it is done, check these for loose parts.

Does my German Shepherd really need a toy?

Just like humans, German Shepherds will benefit from playing with toys.

Not only does a toy relieve boredom, but they also encourage exercise dogs’ safer ways of exploration while satisfying their chewing needs.

A GSD busily chewing or playing with a toy won’t dig up the yard or chew your couch to pieces. Rotating toys per day will help keep your Police Dog healthy, happy, and stimulated.

What happens if my German Shepherd swallows a toy?

It’s not uncommon for your dog to swallow toys, underwear, keys, yarn, and other foreign objects.

In most cases you can just pull it out, however, if it gets clogged up then a professional veterinarian will have to remove it surgically.

The primary symptom is vomiting where you’ll notice first off he’s not feeling good and then he vomits.

This is not something you want to wait around to deal with. If your dog has vomited more than twice or three times, there is a pretty good chance that he’s ingested a foreign body.

Objects stuck in the esophagus are very dangerous because it doesn’t heal well.

But if it makes it to the stomach, which most foreign bodies do, it becomes much easier to remove.

If you suspect that he’s eaten something and he’s vomiting, it’s time to get to the doctors for an X-ray.

What are phtalates and do dog toys have them?

Also known as esters of phthalic acid or phthalate esters, Phthalates are used primarily as plasticizers that increase the flexibility of plastic.

Find toys that are certified and tested in independent facilities for testing to ensure that each toy you purchase meets the phthalate content safety guidelines of the United States government.

What type of toys to give German Shepherds with sensitive gums?

The safest types of toys for dogs with sensitive gums are rubber bones, KONG toys, dental chews, and rawhide.

Ensure to watch your dog closely when using rawhide as it becomes small enough for pets to swallow when eaten.

Instead, this toughened material allows dogs’ teeth to penetrate the toy resulting in less pressure on teeth and gums.

Hence why Pullers training rings are the top pick on our list as they offer a simple energy-burning solution.

These rings are made of very lightweight, tough dense foam that floats, and the two-inch tube allows for dogs to bite, then pull with resistance.

Great for playing fetch, tug o war, and catch with this toy makes the perfect addition to any dog owner’s artillery.

Pick your toys based on the energy, interest, and behavior of your dog. German shepherds are tough energetic dogs with jaws of steel.

Toys that feature toughened rubber, nylon rope, and rawhide are great for dogs with tough jaws and sensitive gums.

Prevent damaging teeth and gums while offering hours of fun.

Finding these toys is not always simple. Luckily for you, we’ve covered all of the above in this guide.

If you’re searching to find the best nail clippers for German Shepherds, you’ve come to Looking for the best dog toys for Great Danes? Great! You’re in the right place.

Bones! Every dog’s dream comes true and is the epitome of bliss. German Shepherds are